I found this book several years ago at a used book sale, and I still take it once in a while and admire it. Such a find! And it is a crime what I paid for it! But it was to support a local Lions Club, so I gave much more than they were asking because I was so pleased with finding this Vintage Gordon Storybook. 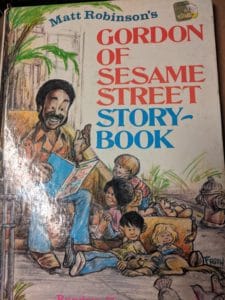 He’s from West Philadelphia and he went to Penn State. No wonder I’m a fan. His daughter is Holly {Robinson} Peete, who is married for a former Philadelphia Eagle. They now have a foundation to support Parkinson’s Disease, (what Gordon/Matt Robinson died from) and autism. However, should be noted that I’m not a huge fan of Ms. Peete due to her support of Autism Speaks and the whole vaccine thing. Having a kid with autism is where our similarities end.

One of the reasons that this is a favorite of mine is that it is one of the oldest vintage Sesame Street items that I own. Sesame Street began airing in 1969, but merchandise didn’t appear until a year or two after that. Remember that since it was 50 years ago, marketers didn’t release a show and a ton of merchandise at the same time, like they do today. They waited to see if a show was popular, then made merchandise available if it was.

This is a book with multiple short stories in it. One of  Sesame Street’s original purposes and mission is to encourage families to read together and increase reading skills in small children. While this is an older item, it is not a first edition. Bummer! 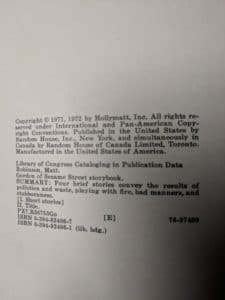 Matt Robinson said that he always had wanted to be behind the scenes, not in front of the camera. I’m glad he changed his mind and created one of Sesame Street’s all time favorite characters.